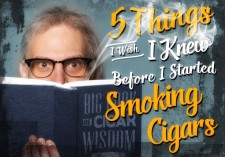 Easton, PA, May 2, 2017 (Newswire.com) - "The year was 1981. There were no cigar magazines, no internet, and I didn’t know any cigar smokers,” writes Cigar Advisor executive editor Gary Korb, referring to the year he caught the cigar bug, in "5 Things I Wish I Knew Before I Started Smoking Cigars." By today's standards, he'd be starting out with a serious handicap, but at least there was a retail cigar store nearby where he could buy his first premium cigar. Interestingly enough, as green as he was, he politely refused the help of the store's clerk and decided to go it alone, which Korb admits may not have been a good idea.

"I should have asked that clerk at least a few questions, but I guess I was a little intimidated," says Korb. "That's why I hope this article will help keep new cigars smokers from making some of the mistakes I made early on."

"At CigarAdvisor.com, the majority of the questions we receive are from new cigar smokers, so I hope they'll check out this post."

"Goldstein was ahead of his time, but during the early 1980s, there just wasn't enough interest in premium cigars to sustain the newsletter," adds Korb. "But other than learning from other cigar smokers and retail tobacconists, it was all I had."

"5 Things I Wish I Knew…" focuses on the following: What makes a cigar a premium, wrapper leaves, body, sizes and shapes, and storing cigars in a humidor. Korb said he avoided going into too much detail in some areas like cigar wrapper leaves because he wanted to encourage readers to search the internet for more information on their own. He does, however, list a number of popular cigar brands in the categories of mild, medium, and full-bodied cigars, such as the Arturo Fuente 8-5-8 Flor Fina, Montecristo Relentless, and Padrón 1000s series respectively, among others.

For sizes and shapes, the article explains how a cigar's ring gauge is determined, and under "Cigar Storage Basics," what devices are required for all types of humidors, including the best temperature and humidity ranges for keeping cigars fresh.

"At CigarAdvisor.com, the majority of the questions we receive are from new cigar smokers, so I hope they'll check out this post," said Korb. "When you look at all of the information available these days on premium cigars, anyone who wants to get into cigar smoking has no excuse for crying ignorance before opening their wallet."

Cigar Advisor, the nation’s premiere online cigar magazine, proudly serves cigar enthusiasts with a uniquely down-to-earth perspective on the enjoyment of premium cigars. Well-known and highly regarded for providing acclaimed educational cigar content and behind-the-scenes industry articles from some of the business’s top names, the Cigar Advisor editors deliver an array of content that speaks directly to those who enjoy the cigar lifestyle.